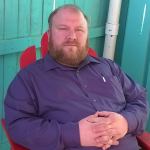 Actually, that’s not true. I’ve done a lot of work on my church’s site, The Point.

Since my last post on this site in February, a lot has changed. I left Blue Sky Entertainment and Sunny 97.9 FM on May 1. A huge business opportunity collapsed, and in a major career shift, I became a chaplain for Interim Healthcare Hospice of Texas and New Mexico. That job has not only transformed me, but has also given me a new lease on life.

I have backed away from politics. I still believe in limited government, personal liberty, and the right to pursue your dreams and advance your station in life (a.k.a., the Pursuit of Happiness.) However, watching, and engaging in the political arena over the past two years has taught me a lot.

So, I have stepped back from the day-to-day political fury, and have focused my efforts on my Spiritual walk, my ministry, and furthering my education (pursuing a business degree from Stephen F. Austin State University.)

My silence since February has given me time to think. And I look forward to sharing those thoughts with you in the coming weeks. God bless.