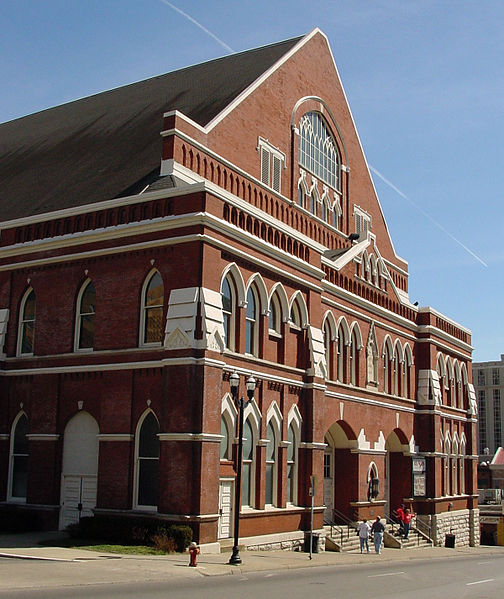 There are many reasons why people think that the Ryman Auditorium is called “the Mother Church of Country Music.” First, it looks like a church. Notice the arched windows and doorways, the American Gothic architecture, and the wooden pews inside.

Then, there’s the devoted, religious following of the Grand Ole Opry, which still closes most of its performances with a Gospel tune.

Finally, there’s the notion that you haven’t really arrived in Country Music until the “Mother Church” gives you her blessing, and you are invited to play the Opry (even if most of the performances are now held at the Opryland Resort.)

But how many realize that the Ryman Auditorium, the Mother Church of Country Music, was actually a church?

In 1885, Riverboat operator and saloon owner Thomas Ryman noticed that the ongoing Christian revival across Tennessee is cutting into his business. Looking to preserve his business ventures, Ryman decided to go to a revival meeting held by the great Evangelist Samuel Porter Jones for the purpose of disrupting and heckling the service.

Instead of stopping the revival, Ryman himself wound up converting to Christianity. So moved by the preaching of Jones, and his own redemption, Ryman endeavored to make sure everyone could hear the Gospel as spoken by Jones’ voice. So, he invested $100,000 ($2.7 million in today’s cash) to build the “Union Gospel Tabernacle,” a 6,000 seat chapel where Jones would be able to preach to multitudes.

Worship services were held, and Jones held many revivals in the facility. The tabernacle was renamed the “Ryman Auditorium” in 1904 by Jones as he preached Ryman’s funeral.

The Ryman Auditorium closed in the 1930s, and fell into disrepair before being taken over by WSM-AM in the 1960s to become the site of the Grand Ole Opry.

I read this story several years ago, and it continues to impress me that a hardened sinner was so moved with gratitude for his salvation, and concern for the eternal destiny of his fellow man, that he put his fortune to the test to build a place where everyone could come, hear the Gospel, and be saved.

When I think about this, I wonder what I have done to show my gratitude to God for my salvation. I also wonder what would happen if I did more. Furthermore, what if we had more Thomas Rymans in the world, hardened sinners broken and redeemed by the power of Christ who turned around and did everything in their power to reach those around them? If this happened, what kind of revival would we see in our country?

Right now, the entertainment industry politicizes everything, thinking that to legitimize their fame and popularity, they have to adopt a cause or message to change the world. Politicians legislate to leave their mark on the world. Athletes endorse ideas and causes.

May God grant you the boldness to live out your faith and reach others with the Gospel.

2 thoughts on “The Ballad of Thomas Ryman”