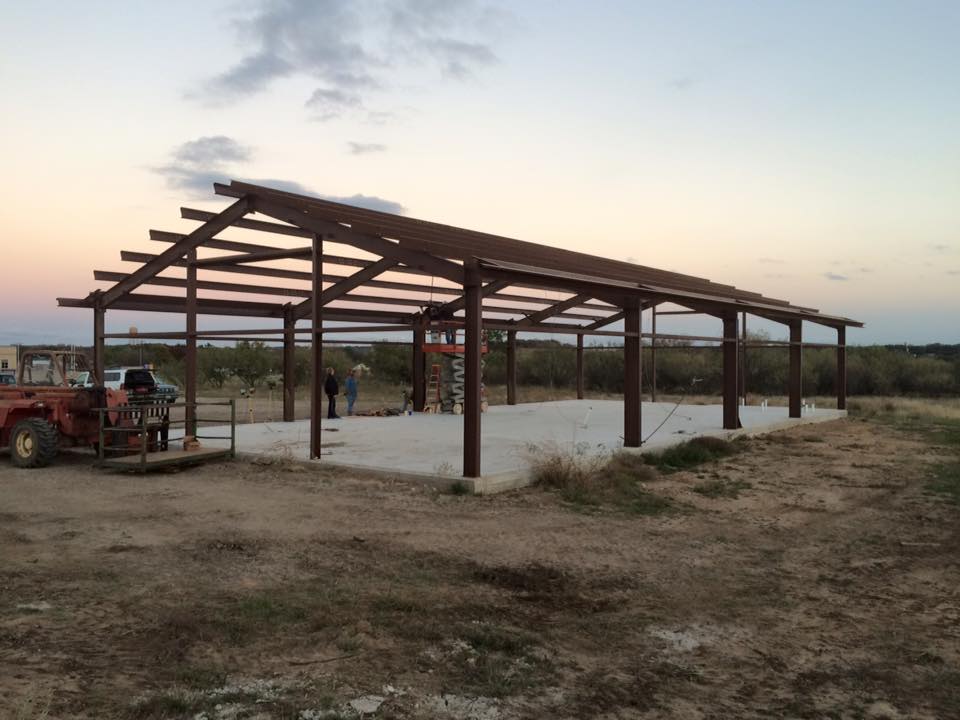 The above-posted picture is the framework for Life Point Baptist Church’s new worship facility, which will open this summer on Sunrise Drive next to Early Elementary and Middle Schools. That picture was taken in 2014, and it seems both like it was yesterday, and that it was ancient history.

As I write this post, work crews are not only finishing up the electrical work on Life Point’s new facility, but construction crews are working on the new Hobby Lobby location, the new Burger King, and ground will soon break on a new town-home development. Further retail developments are in the works, but nothing has been solidified yet.

My goal as the newest member of the city council is to make sure we foster an environment where families want to move to Early, entrepreneurs want to build businesses in Early, and consumers want to shop in Early. My goal is to see this pro-family, pro-business environment cultivated while holding the line on property taxes, and dropping property tax rates when possible.

Today, I was asked what the city needed from its business community. My response? “Sell your product, grow your business, enjoy life.”

In Early, we have an amazing opportunity to improve an already great community. We have an opportunity to cultivate a community where life is good. All we need to make that happen is for the people of Early to build their lives and enjoy life.

As you do this, keep an eye on the horizon. Great things will soon appear there.

There are many reasons why people think that the Ryman Auditorium is called “the Mother Church of Country Music.” First, it looks like a church. Notice the arched windows and doorways, the American Gothic architecture, and the wooden pews inside.

Then, there’s the devoted, religious following of the Grand Ole Opry, which still closes most of its performances with a Gospel tune.

Finally, there’s the notion that you haven’t really arrived in Country Music until the “Mother Church” gives you her blessing, and you are invited to play the Opry (even if most of the performances are now held at the Opryland Resort.)

But how many realize that the Ryman Auditorium, the Mother Church of Country Music, was actually a church?

In 1885, Riverboat operator and saloon owner Thomas Ryman noticed that the ongoing Christian revival across Tennessee is cutting into his business. Looking to preserve his business ventures, Ryman decided to go to a revival meeting held by the great Evangelist Samuel Porter Jones for the purpose of disrupting and heckling the service.

Instead of stopping the revival, Ryman himself wound up converting to Christianity. So moved by the preaching of Jones, and his own redemption, Ryman endeavored to make sure everyone could hear the Gospel as spoken by Jones’ voice. So, he invested $100,000 ($2.7 million in today’s cash) to build the “Union Gospel Tabernacle,” a 6,000 seat chapel where Jones would be able to preach to multitudes.

Worship services were held, and Jones held many revivals in the facility. The tabernacle was renamed the “Ryman Auditorium” in 1904 by Jones as he preached Ryman’s funeral.

The Ryman Auditorium closed in the 1930s, and fell into disrepair before being taken over by WSM-AM in the 1960s to become the site of the Grand Ole Opry.

I read this story several years ago, and it continues to impress me that a hardened sinner was so moved with gratitude for his salvation, and concern for the eternal destiny of his fellow man, that he put his fortune to the test to build a place where everyone could come, hear the Gospel, and be saved.

When I think about this, I wonder what I have done to show my gratitude to God for my salvation. I also wonder what would happen if I did more. Furthermore, what if we had more Thomas Rymans in the world, hardened sinners broken and redeemed by the power of Christ who turned around and did everything in their power to reach those around them? If this happened, what kind of revival would we see in our country?

Right now, the entertainment industry politicizes everything, thinking that to legitimize their fame and popularity, they have to adopt a cause or message to change the world. Politicians legislate to leave their mark on the world. Athletes endorse ideas and causes.

May God grant you the boldness to live out your faith and reach others with the Gospel.

I was on the phone with a publicist for a movie production taking place in Texas.

“This is big,” she said. “Oprah has reviewed our script, decided she likes it, so the film will be produced by The Weinstein Company.”

Back when this conversation took place, The Weinstein Company was nothing more than a “W” logo that flashed on the screen at the beginning of a movie trailer or at the end of the movie credits. I didn’t know who they were or what they did. I did know who Oprah was, and I thought it was really cool that she had taken on this particular project.

There’s a lot with which I disagree with Oprah. I think her daytime TV talk show is overly emotional. Her politics lean left, mine lean way right. I still haven’t forgiven her for thrusting Dr. Phil upon us. Then again, I can blame the Texas beef industry for that. Had they never sued her over her show on “Mad Cow” disease, she’d have never gone to court in Amarillo, and would have never met Dr. Phil.

On the other hand, I have to respect a woman who went from absolute poverty to the billionaire she is today. She accomplished her success through hard work, good decisions, and by creating a product that, even if I don’t like it, is adored by millions.

Still, her speech at the Golden Globes the other night went all over me. While I agree with the message she spoke, I wondered how she must have felt delivering the message.

I don’t think Oprah engaged in inappropriate behavior with Harvey Weinstein. She has too much dignity and class. I don’t think she knowingly helped him, or was complicit in any specific encounter he had. She has a moral compass.

Yet, everyone in Hollywood, Oprah included, knew what Harvey Weinstein was. Go back and look at the Seth McFarlane joke on YouTube. Read or watch the jokes about the entertainment industry, and how Hollywood execs, including Weinstein, behaved themselves. What was going on was common knowledge, and had even become the punchline of a twisted cultural joke.

So, when she stood on stage and proclaimed that a new day was coming when powerful men would no longer be able to prey on young ladies, I couldn’t help but think, “Why haven’t you said anything before now?”

As long as getting along with Harvey Weinstein was good business, Oprah did it. Now that Weinstein has been revealed to be the pervert that he is, good business dictates criticism of him and the entertainment industry that allowed him to thrive.

But that’s all it is. Good business. Oprah’s speech, and the “Time’s Up” pins worn to the Golden Globes amount to nothing more than a social media post designed to get page views because the right hashtag was used. And therein lies the problem.

Our culture has become one of “hashtag activism.” You don’t actually do anything, you just post about it, and people congratulate you on your compassion for being able to type 140-280 characters.

When you log onto Facebook, look in the right-hand margin. You’ll notice a few topics that Facebook says is trending. On Twitter, that list is to the left. Make any post, add a hashtag that aligns with the word or phrase that is trending, and presto! Page views, comments, likes and shares.

When Weinstein’s accusers came out, the #MeToo hashtag began to trend. When that happened, accusations came out against multiple Hollywood celebrities and executives. Justice for sexual harassment victims trended, which is why Hollywood added the #TimesUp pins, and Oprah gave her speech. They are merely following the social trend.

Next year, this will all be forgotten, and another social cause, environmental cause, or political cause will take its place. Hopefully, more will have been accomplished than a few elite personalities going viral on social media.

In the meantime, Oprah can bring about a lot of healing, to her industry and reputation, by apologizing for her associations with Weinstein and vowing to create an entertainment industry where young ladies will be able to sell their talents, not their bodies.

Scrolling through my news feed this morning, I came across this gem, comparing the distraction most Americans enjoy via the NFL with the distractions most Romans enjoyed via chariot races, gladiator “games,” and the Olympics.

And while the Roman government deliberately built elaborate stadiums to distract the masses from the crumbling empire and human rights abuses, in America, we distracted ourselves.

Now, I’m not bashing sports, or the NFL. I enjoy watching football, and even have been able to attend a few Big-12 College Football games, and one Dallas Cowboys’ Thanksgiving Day game.  I will probably continue to enjoy watching sports for the foreseeable future.

But for some reason, seeing the above-posted meme on Facebook was kind of an eye-opener for me.

Do you know why the NFL protests were so controversial? And subsequently, why the NFL protests have, at least in part, played a role in the decline of NFL ratings? It’s because, once the players used their platform to advance a socially conscious agenda, they reminded us of the social problems that remain in America.

Whether you agree with Colin Kaepernick or not, seeing he and his followers take a knee during the Star-Spangled Banner reminded you that the reconciliation we thought we had accomplished hadn’t advanced us as far as we had thought. Having that bubble burst, watching football became a reminder of the deep-divides that remain in American society. Once that happened, watching football wasn’t as fun as it was before.

And that’s why the NFL protests were so controversial. People don’t like to be reminded of their problems as they try to escape them. So, we had the controversial debate over the past two years, and we quit watching football.

The good news is that we can use our newly raised awareness to make good things happen. True change will not come through legislation, political action, or by socially-conscious NFL players. It will come through the small, daily decisions made by each individual. So, to borrow a phrase, “be the change.” Extend random acts of kindness to others, and let your light so shine before men that they may see your good works, and glorify your Father in Heaven.